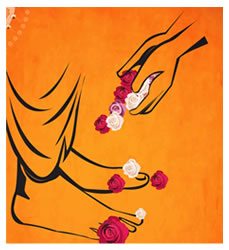 Guru Purnima
The day of full moon, Purnima, in the month of Ashadh is traditionally celebrated as Guru Purnima by Hindus. Also known as Vyas Purnima, the day is celebrated in remembrance and veneration to sage Ved Vyas. He is the Adi (original) Guru of the Hindu Dharma, who classified the Vedas, wrote the eighteen Puranas and the Mahabharat. On this day, the Guru is offered Pujan (worship) by the disciples. First we shall consider the role of a Guru in life.
The Need of a Guru
The Sanskrit word "Gu" means darkness or ignorance. "Ru" denotes the removal of that darkness. Therefore one who removes darkness of our ignorance is a Guru. Only he who removes our ultimate darkness, known as Maya, and who inspires and guides us on to the path of God-realization is the true Guru. Students also refer to their school teacher or college lecturer as guru. The connotation of the word guru in this case is one who imparts temporal knowledge (Apara Vidya) and is thus accordingly offered respect.
A spiritual aspirant, no matter how brilliant, can never attain such knowledge by his own endeavor. This is stipulated in the Shrimad Bhagwatam in which Jadbharat reveals to king Rahugan:
"O Rahugan! One cannot attain knowledge of Atma and Paramatma by performing penance, sacrifices, renunciation, Vedic study or worshipping deities of water, fire or the sun. But when the dust from the feet of a satpurush (God-realized Guru) sprinkles on our heads, then we can surely attain this knowledge."
In essence, one can only attain salvation by serving the satpurush. Treading the path to God-realization by one's own efforts is likened by the Katha Upanishad as walking on a razor's edge. Adi Shankaracharya echoes a similar injunction: "If a person, despite possessing: a handsome, disease-free body, fame, a mountain of wealth, and even if he has studied the Vedas and all other scriptures, and has himself composed many scriptures, but has not surrendered himself at the feet of a Guru, then he has achieved nothing, nothing, nothing, nothing."
The Guru plays a vital role in boosting the aspirant frequently, when he loses track, becomes despondent or simply runs out of steam. The aspirant is thus better able to obey the Guru if he understands the Guru's glory.
Glory of the Guru
The Hindu shastras have hailed such a Guru immeasurably:
Skanda Purana - Guru Gita
A famous verse known by heart by all Hindu children glorifies the Guru:

The guru is Brahma, Vishnu and Mahesh (Shiva), veneration to the Guru who is Parabrahman manifest."
The second line of the couplet does not literally mean that the Guru becomes Parabrahman - God, rather he is venerated as if God is manifesting through him.
This is subtly illustrated by another famous verse known to all Hindus:
Guru Govind donu khade, kisko laagu paay,
Balihari Gurudevaki jinhe Govind diyo bataay.
The Guru and Govind -God, are present before me, to whom shall I bow down first? Glory to the Guru since he showed me Govind.
Apart from guiding the aspirant on the path to God-realization, the Guru throws light on the profound meanings of the vast array of scriptural knowledge. Hence the Mundaka Upanishad calls such a Guru "Shrotriya" - knower of the true meanings of the scriptures. Adi Shankaracharya forbids an aspirant in endeavoring to decipher the meanings without a Guru. In his commentary on a Mantra (1/2/13) of the Mundaka Upanishad, he says: "Even if one possesses knowledge of the scriptures, he should not attempt to delve into their meanings by himself. He should obtain the knowledge of Brahman only through the Guru."
In their treatises, other Acharyas, such as Ramanuj and Nimbark have considered the Guru mandatory in God-realization.
The Guru in the Swaminarayan Sampradaya
In accordance with the injunctions from shastras of Hindu Dharma cited above, Bhagwan Swaminarayan too considers the Guru as foremost; to be venerated as one venerates God. In His Vachanamrutam He uses the terms Sadhu and Satpurush synonymously for the true Guru.
Gadhada III.27:
"The scriptures advocate five attributes of: Nishkam, Nirlobh, Nirman, Niswad and Nisneha for a sadhu. The sadhu in whom one observes such attributes has a constant rapport with God. Therefore one should have immutable faith in his words, and by his words should realize the knowledge of God."
Gadhada III.26:
"The sadhu who lives in a way in which he subdues his indriyas and antahkaran, but is not subdued by them, who engages in God-related activities only, strictly observes the Panch Vartamans, believes himself as being Brahman and worships Lord Purushottam, can be known neither as a human being nor a deva, since neither man nor deva possess such attributes. Therefore such a sadhu, though a human being, deserves to be worshipped at par with God."
Finally, how should an aspirant serve such a Guru?
Serving the Guru
Again the scriptures guide the aspirant: