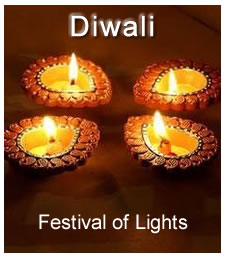 Diwali :-
“Diwali, the festival of lights, dispels the darkness, & strengthens our close friendship & leads us to the path of knowledge-enlightenment.”
The festival of Diwali has been celebrated for ages and the history of Diwali celebrations is as old as the history of India. Everyone on this festival enjoys the delicious Diwali sweets, the brightly lit Diwali Lamps (Diwali diyas) and the unique excitement grips people around this time. There have been so many important legends associated with the occasion of Diwali that five days have been accredited for the celebration of Diwali in India with each day holding importance of its own.
History & Origin :-
The history of Diwali is related to the Hindu Purana(s). Hindus believe that whenever the power of evil increases in the world, Lord Vishnu comes down to earth in a different form to defeat evil. These forms are called Avataras. Krishna and Rama are the popular Avataras of Vishnu. Goddesses accompany gods. Diwali celebrations are especially a time for telling stories about Vishnu and his wife Lakshmi, and about Krishna, Rama and his wife Sita.
The Story of Rama and Sita :-
Lord Rama was the seventh incarnation of Lord Vishnu. He was a great warrior King who was exiled by his father Dashratha, the King of Ayodhya. Lord Rama’s wife Sita and his brother Lakshmana accompanied him in his exile. Lord Rama returned to his Kingdom Ayodhya after 14 years of exile, in which he put an end to the demon Ravana. After this victory of Good over Evil, Rama returned to Ayodhya. The people welcomed them by lighting rows of clay lamps. Great celebrations were held and everyone was happy for Rama to be the King of Ayodhya. So, it is an occasion in honour of Rama's victory over Ravana.
Five days of Diwali:-
The following are the five days of Diwali, each having the rituals and myths of its own.