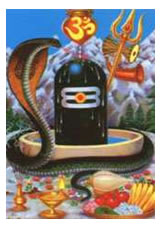 There are snake-temples in our country with idols of snake-gods. In these temples cobras are also reared and live snakes are worshipped on Nag-Panchami day. • Adiesha Temple in Andhra Pradesh. • Nagaraja Temple in Kerala. • Nagathamman Temple in Chennai. • Hardevja Temple in Jaipur.

The manners of snake-worship practiced here resemble the traditions prevalent in India. The people go to the popularly believed to be tenanted by the ophidian deities to make their offering to them.