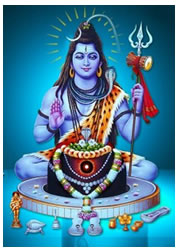 Mahashivaratri
ॐ नमः शिवाय
Mahashivaratri Festival or the ‘The Great Night of Shiva’ is celebrated with devotion and religious fervour in honour of Lord Shiva, one of the deities of Hindu Trinity. Shivaratri falls on the 14th day of the Krishna Paksha (Dark fortnight) in the Hindu month of Phalguna ( Magha as per Vikrama calendar ), which corresponds to the month of February - March in English Calendar.
Shiva Purana says that performing abhisheka of Shiva Linga with five different dravyas (milk, curd, honey, ghee and sugar) and water while chanting Sri Rudram, Chamakam and Dasha Shanthi pleases Lord Shiva the most. According to the mythology, each of these dravyas used in the abhisheka bestows certain welfare :-

During this worship, Lord Shiva is offered special food made from the fruits of the season, root vegetables and coconuts. After this, Bilwa leaves, are offered to the Shivalinga. Ber or jujube fruit is also offered to Lord Shiva, as it is symbolic of longevity and gratification of desires. Some devotees also offer the auspicious betel leaves to Lord Shiva marking satisfaction with worldly pleasures. Garlanding of Linga with flowers and garlands is also a part of the Shivaratri Puja. Devotees also burn incense sticks and light lamps which symbolize the attainment of knowledge.
This worship of Lord Shiva continues through out the day and night of Shivaratri. Devotees stay awake and spend the night in Shiva temples, chanting ‘Om Namah Shivaya’ and singing hymns and verses in praise of Lord Shankara.
Shivaratri Celebrations by Women
Shivaratri Festival is particularly awaited by Hindu women. On Shivaratri, married as well as unmarried women perform puja with great faith, as Goddess Parvati who is also called 'Gauri', is regarded as the giver of 'suhag' (i.e.Saubhagya - good husband ), marital bliss and a long and prosperous married life. Unmarried women also pray for good husband like Lord Shiva who is regarded as the ideal husband.
Shivaratri Fast
Shivaratri Fast is considered to be the most important fast for the devotees of Lord Shiva. Shiva Purana goes on to say that if a devotee observes Shivaratri Vrata with sincerity, pure devotion and love, he is blessed with the divine grace of Lord Shiva. Though many go on a diet of fruits and milk, some do not consume even a drop of water all through the day and night of Shivaratri Festival. Devotees observing Vrata on Shivaratri break it only the next morning by partaking prasada offered to Lord Shiva.
Mahashivaratri Vrata
Mahashivaratri or 'Shiva's Great Night' symbolizes the wedding day of Lord Shiva and Parvati. Many however, believe, Mahashivaratri is the night when Lord Shiva performed the Tandava Nritya - the dance of primordial creation, preservation and destruction.
According to Hindu mythology, observance of Mahashivaratri Vrata with discipline helps a devotee to control the two great natural forces that afflict a man, rajas guna (the quality of passionate activity) and tamas guna (the quality of inertia). When a devotee spends an entire day in the Feet of Lord and worships with sincerity, his motion is controlled and evils like lust, anger etc. born of Rajas are ignored and subdued. Besides, when a devotee observes vigil throughout the night (jaagaran) he manages to conquer the evils of Tamas Guna too. It has also been mentioned that when a devotee observes a round of worship every three hours, the Shivaratri Vrata becomes perfect. It says that a devotee who performs sincere worship of Lord Shiva on the auspicious day of Shivaratri is absolved of sins and attains moksha.
Tradition of Drinking Thandai
Since Lord Shiva is regarded as an ascetic god, Mahashivaratri is very popular among ascetics. Thandai, a drink made with bhang (cannabis), almonds, and milk, is essentially drunk by the devout on the day as cannabis is said to have been very dear to Shiva.
The Significance of Mahashivaratri :
There are several stories which are associated with this special grand night of Lord Shiva: