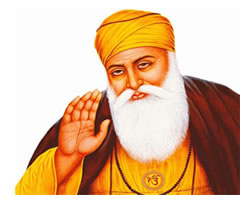 Philosophy & Teachings.
Guru Nanak philosophy & teachings can be summarized as:

• There is only one God, who is known by different names in different religions.
• Strive hard and make a whole hearted effort to help others, because service to mankind is the biggest service to God.
• Follow the path of honesty.
• In the eyes of God, all are equal, irrespective of the caste, age, creed or sex.
• Be compassionate towards all living beings. Lead a simple life.
• Don't get scared of anything and just keep performing good deeds.