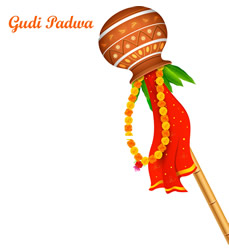 Gudhipadwa
The Hindu New Year is celebrated with equal pomp and enthusiasm in all over India. The significance of Hindu New Year festival lies to the underlying fact that, it marks the departure of chilly winters and the arrival of spring. A season where nature is all in its vibrancy, with fragrant flowers, early chirping of the birds, the fresh fruits of harvest and lush greens all enveloped around.
For the Hindus, it symbolizes the dawn of another cycle and a period of a new agricultural cycle. It marks the new beginnings filled with high expectations, apprehensions, hope and joy.
Gudhi Padwa – Hindu New Year in Maharashtra
Gudhi Padwa, or Gudi Padva, is the New Year in Marathi culture as per traditional Hindu lunar calendar. Gudhi Padva is observed mainly in Maharashtra, Goa and parts of Karnataka. The first month in the Marathi calendar is Chaitra and Gudhi Padwa is observed on Chaitra 1 or the first day of Chaitra. The most important event on the day is the hoisting of the Gudhi (victory flags) in front of the homes. In 2009, the date of Guhi Padwa is March 27.
There are numerous legends associated with the flag hoisting on Gudi Padwa and it varies from region to region and from community to community. The most important legends are the defeat of Shakas by Shaliavahan and some people hoist it to commemorate the victories of Chatrapati Shivaji Maharaj.
The highlight of the day is the hoisting of flags on a bamboo staff. The flag hoisted on Maharashtrian New Year is made of green or yellow colored silk cloth. A bright garlanded goblet is hung on top of the flag pole. Neem leaves, mango leaves, garland of red flowers and gaohi (sweet) are hung on the Gudhi. Rangoli is drawn near the Gudi or in front of the house.
Offering made of neem leaves and neem flowers and jaggery is distributed on the day. The offering consists of neem leaves and neem flowers, soaked dal, cumin seeds, honey or jaggery and asafetida. The offering symbolically indicates that life is filled with joy and sorrow.
Gudi Padva is one of the most auspicious days in the Marathi Hindu Calendar and is considered ideal for starting new ventures and investment. It is believed that every moment on the Gudhi Padwa day is auspicious. The day also heralds the arrival of the spring season.
Farmers make it a point to plough the field on the Gudhi Padva day and they believe it will help in having a good harvest in the ensuing agricultural season.
Delicious food, which includes sweets and special Maharashtrian cuisines, are prepared on the day is distributed to neighbors, friends, relatives and farm laborers and other workers.
Hindu New Year celebrations across the country with different customs and traditions are based on the theme of new beginnings and a commencement of harvest festival. It normally celebrated from March to April every year, depending on the calendar of different communities (i.e. Varsha Pratipada, Yugadi tithi, Hindu New Year).
Importance:
The Hindu New Year begins on the first day of the month of Chaitra from the Hindu lunar calendar. The natural and historical reasons to mark the commencement of the year on the first day of the month Chaitra of are discussed in the following sections.
Natural: The spring season commences, the trees bear new foliage and appear fresh. In the Shrimadbhagvadgita the Lord says, “Among the seasons the exhilarating Vasant season (spring) is My manifestation,” thus signifying the importance of this season. In this season the weather is pleasant and exhilarating.
Historical: Lord Rama, an incarnation of Lord Vishnu, returned to Ayodhya after slaying the demons and Ravan, an evil king of the demons who had kidnapped Lord Rama’s queen, Sita, on this very day. He slayed Vali, a powerful and evil king of Kishkindha on this very day.
The significance of the Hindu New Year (Gudhipadva)

Ritualistic Worship of Gudhipadva
Ritualistic worship: First ritualistic worship of God as a routine ritual is performed. Following this one should perform a mahashanti ritual, which begins with the worship of Lord Brahma, as He is responsible for creating the universe on this day. He is offered davna (a type of fragrant plant) during the worship. Later, a sacrificial fire (hom) and offerings of oblations through the fire (havan) are performed and offerings to Brahmans are made. Then Lord Vishnu is worshipped with offering obeisance by chanting the mantra, meaning, 'I bow to Thee, O Lord Vishnu, Who manifests in innumerable forms'. Then the Brahmans (Hindu priests) are offered money or presents (dakshina), and if possible, historical and mythological texts. It is said that by performing mahashanti one is cleansed of all sins, no new sins are generated, one's life span is increased and one becomes wealthy. By performing sanvtsar worship, all sins are cleansed, lifespan is prolonged, a woman’s married life is prolonged and one acquires serenity. On this day the deity of that day of the week is also worshipped.