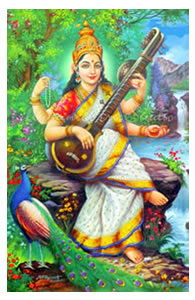 Saraswati Puja
Saraswati is the Goddess of learning, knowledge, and wisdom. The Sanskrit word sara means "essence" and swa means "self." Thus Saraswati means "the essence of the self." Saraswati is represented in Hindu mythology as the divine consort of Lord Brahma, the Creator of the universe. Since knowledge is necessary for creation, Saraswati symbolizes the creative power of Brahma. Goddess Saraswati is worshipped by all persons interested in knowledge, especially students, teachers, scholars, and scientists.
Saraswati represents intelligence, consciousness, cosmic knowledge, creativity, education, enlightenment, music, the arts, and power. She is not only worshipped for secular knowledge, but for the true divine knowledge essential to achieve moksha. She is also referred to as Shonapunya, a Sanskrit word meaning “one purified of blood”.
Bakdevi, Biraj, Sharada, Brahmi, Shatarupa, Mahashweta, Sarbasukia, Prithudhar, Vagiswari are some of the other names of Goddess Saraswati.
Appearance :-
In Her popular images and pictures, Goddess Saraswati is generally depicted with four arms (some pictures may show only two arms), wearing a white sari and seated on a white lotus. She holds a book and a rosary in Her rear two hands, while the front two hands are engaged in the playing of a lute (veena). Her right leg is shown slightly pushing against Her left leg. She uses a swan as Her vehicle. There is a peacock by Her side gazing at Her.
This symbolism illustrates the following spiritual ideas:

Saraswati Puja:-
Saraswati Puja is performed on the 5th day of Falgun month of Hindu Calendar (Also known as Basant Panchami). In several parts of India, generally states to the south, Saraswati Poojas are conducted during Navaratri - a 9 day long festival celebrating the power of feminity. Navratri is celebrated in all goddess-temples of India- especially with great pomp and splendor in south and east India. The last three days of Navaratri starting from Mahalaya Amavasya (the New Moon day) are dedicated to the goddess. On the ninth day of Navaratri (Mahanavami), books and all musical instruments are ceremoniously kept near the gods early at dawn and worshipped with special prayers.

Translation:-
"May Goddess Saraswati, who is fair like the jasmine-colured moon, and whose pure white garland is like frosty dew drops; who is adorned in radiant white attire, on whose beautiful arm rests the veena, and whose throne is a white lotus; who is surrounded and respected by the Gods, protect me. May you fully remove my lethargy, sluggishness, and ignorance ".

Methods for Saraswati Puja to worship Goddess Saraswati :-
The idol is decorated in white, representing purity. The place where the idol is kept for the Pooja is decorated with floral designs or Rangolois and the design of a fish is considered auspicious.
Family members bathe early and dress in yellow attire and assemble in front of the Goddess. A flat low stool made of wood is covered with yellow cloth and the idol is placed on it, facing East direction. Then, the face of the idol remains covered till the priest begins chanting the mantras at the commencement of the puja.
Books of the students at home are placed before the goddess.
The main pooja offerings to the goddess are mainly fruits; most significant are Berries from the wild plum tree. Other fruits include tapioca. Sweets include puffed rice, jaggery and yogurt.
A Havan (hymn) is done by the priest (or the eldest among the family) using special wood, ghee, joss sticks and incense. There absence of a burnt smell signifies the success of the puja. A diya or lamp is also kept lit along with the prasad.
Arati is performed by the person in the morning and again in the evening. This is done while chanting sanskrit slokas (in brahmans house) or slokas from the regional language in non-brahmans houses) and accompanied by the blowing of conch shells and the beating of drums (in northern India or holy pooja-bell in southern India).
The most significant part of the Saraswati Puja is, nobody touches books on that particular day. This signifies that the goddess is blessing the books placed in front of her that day. Young Kids in the family are asked to write for the first time in life, the alphabets by the priest / family elder. It suggests the first step being taken in the acquisition of Knowledge.
The Celebration of Saraswati Puja :-
Saraswati puja is celebrated through out the country. The Goddess of knowledge is revered among the students and learned who strictly follow all the rituals to worship her. The festivities that accompany Saraswati puja is a part of the social celebrations.
Young girls are seen in yellow saaries. Pushpanjali (offering of flowers along with mantras) are offered. Bright palash flowers are offerd that are a part of the worship. Young people enjoy the day with each other. Cultural programmes are staged at night. The Goddess who is the patron of music, culture and learning is revered by singers and musicians with great devotion.
Festivals :-
The festival is concluded on the tenth day of Navaratri (Vijaya Dashami) and the goddess is worshipped again before the books and the musical instruments are removed. It is customary to study on this day, which is called Vidyarambham (Literally, Commencement of Knowledge). All students are traditionally required to study a part of all that they have learn till that day, and also to start the study of something new on the same day. Gurus (Preceptors) are worshipped on this day as embodiments of Saraswati. In major part of India this Navratri is associated with Goddess Durga, but down South is celebrated as Saraswati Puja.
During Vasant Panchami, which comes either at the end of January or the beginning of February, prayers and pujas are offered to her.
Major temples for the goddess are in Shringeri (Karnataka), Pushkar (Rajastan). Though temples for saraswati are rare, there are some minor temples in Kumbakonam,Koothanur (Tamilnadu), Basar(Andhra Pradesh). Also Deupatan, Kamalakshi, Thimi, Bhadrakali ,Gairidhara in the Kathmandu region have her temples. Many people visit temple on that day, to worship God Saraswathi to get her blessing to get Best of Education / Art / Culture.