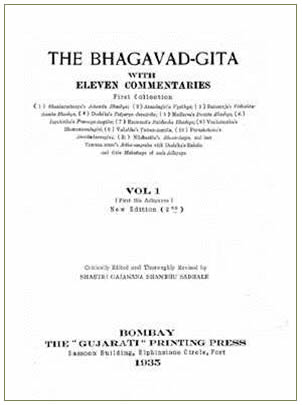 The following Commentaries are included

At the end of each chapter, Vidyalamkara Dhupakar Shastri has added his brief notes (called Avigita), which contains a criticism of few points of discussion raised by the late Lokmanya Tilaka, and a Sanskrit rendering of some portions of the older Marathi commentaries written by Jnanesvara and Vamana Pandit.
Sri Gajanan Shambhu Sadhale Sastri compiled the major commentaries on the Gita into a single book. First edition of this book, Srimad Bhagavad Gita with Eleven Sanskrit Commentaries, edited and compiled by him was published (partially) in 1906. Later, this work was published completely as a three volume set in 1935.
These volumes are indeed valuable to ascertain at once the opinions of various commentators and offers great facilities for a comparative and critical study of the material connected with the Bhagavad Gita.